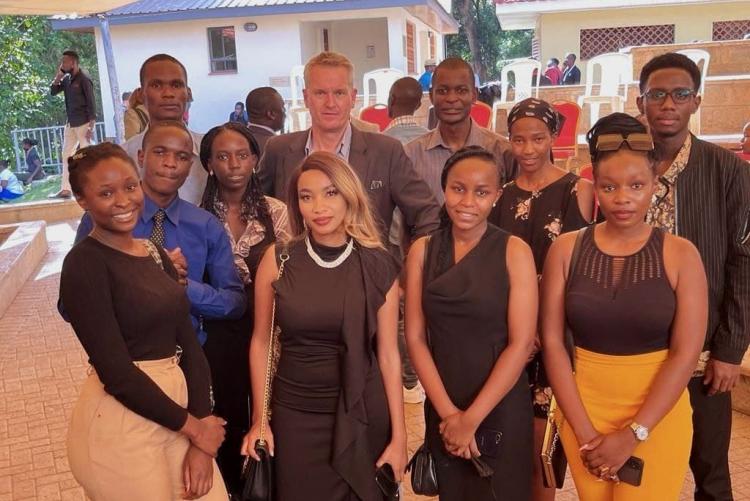 Department of journalism students at The People Dialogue

An opinion piece by Journalism Students, written by Nicole Choka

As the small boys in your neighbourhood play football after a long day at school, it is common to see one of them suddenly pick up the ball, go home with it and the match ends unceremoniously. This happens often times because the mother of this boy could be calling him back home due to curfew or most times because he is on the losing side. This boy, who is clearly the owner of the ball, is entitled to it and feels they can do whatever they want no matter how much anger it evokes in the other players. Picture this ball as a media station and this boy who is the owner, as a prominent person in the government. This is the journalism pandemic that we are living in today.

Imbued with the free thinking spirit of their youth and  the burning curiosity to grow their young impressionable journalistic minds, a few students from the University of Nairobi Department of Journalism,  attended the The People Dialogue Festival event at the National Museum on the Thursday, March 10, 2022. The Rolls Royce of panelists included the celebrated, Hon Naisula Lessuda, Member of Parliament Samburu West and former journalist, Rosalia Omunga, CEO Kenya Editors Guild and lastly a former environmental parliamentary member of Denmark. It was a session hosted by Constructive Institute in partnership with The Kenya Editors Guild, The Danish Embassy, Nairobi and 2030 Beyond.

We know that the role of journalism is to inform, educate and entertain. But is this still the narrative? Do we still feel informed or educated by the news stories that come our way as we watch the news today? Journalists have a role to tell stories as they mirror exactly what is happening in our society. These stories however have to take a creative angle whether positive or negative as they maintain objectivity. Sensationalism is a major problem facing journalism today. It makes news cater for entertainment without considering the other two roles which are as important, if not more. News travels fast around social media which is like the 21st century news bulletin. The faster it spreads, the faster it becomes a trend, emotions are spiked everywhere among the audience, opinions flood this space and in turn the facts of a story slowly start drowning in this pool of entitled opinions. As a journalist, it is important to be informed about these trends but they should only be a motivation to be more innovative in your storytelling and encourage you to go deeper into getting the facts and hence sharing sustainable and helpful information with the audience. This then influences the people’s reaction to certain matters around them and hence impacting change.

This ball is often treated differently when the owner happens to be a government official or when partnerships are involved between the media and the government. You find that just like the owner of the ball greatly impacts how the game goes, the same applies to politicians who invest into media houses. The objectivity in news reporting is lost and the stories and the angles taken now become subjective to these politicians or other government officials involved. If told to write a story about your parents, no matter how often you argue and disagree with them, you will definitely paint a good picture of them to the readers of the story. The media should be free of any government partnerships because this blocks truth in news. Political stories are often reduced to catchy sound bites that interest the audience while the politicians associated with these media stations are most times only covered on their good behaviour. This being the electioneering period, it makes us even more concerned about the level of truthfulness about the state of politics, the closer we get to the ballot. Just like climate change that seeks to have zero emissions to stem global warming, obliteration of political influence in journalism will take time. Taking time does not mean nothing is happening. Taking time means that the work is underway and it is the work of every journalist to ensure that they push further with this agenda by ensuring in every piece of work they are part of, is free, fair and far from deceit.

The celebrated late neurosurgeon, Paul Kalanithi, stated in his publicly acclaimed memoir more elegantly than we ever could when he noted, "You can't ever reach perfection, but you can believe in an asymptote toward which you are ceaselessly striving." It is our hope that with time, media stations in the country will attain financial independence as the lack of it, is a main contributing factor to the myriads of fake and biased news that continues to suffuse our country. We hope for constructive journalism. As a journalist, credibility should be at the top of the list when writing any news. Information should be given to the public as it is, enabling them to make their own decisions based on what they feel rather than what has been influenced by trends.

When we focus on what the public wants and not what they need, then at this point we seize to live on our duty as journalists. Journalists need to make a fervent choice to be objective in their work. The choice that precedes change, the change we all need.